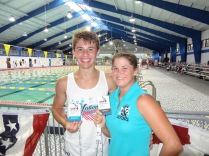 Nathan Howze began diving at the age of 9, while he lived in Maui, Hawaii. He joined Atlantic Coast Diving, at the age of 11, and has been with the team since. He dove for Bartram Trail High School and lettered for all four years, qualifying for FHSAA State Championships each year, eventually winning his senior year in 2017. In 2015, he participated in USA nationals on 1 meter, placing 33rd with a score of 257.70.

He then continued his academic and athletic career at St. Bonaventure University in New York with Stephanie Fleming. He competed in various meets, until a shoulder injury ended his diving career. He now coaches for Atlantic Coast Diving and is a junior at the University of North Florida, majoring in Astrophysics. His goals for the team include sharing his passion for the sport with those he coaches, helping them to achieve their goals and build their self-confidence in the process.