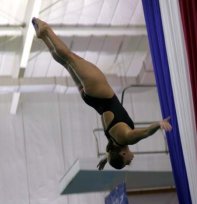 Courtney began diving at the age of 14 after a 12 year gymnastics career at Gymnastic Unlimited in Jacksonville, Fl. After retiring from gymnastics, Courtney joined the N.B. Forrest High School diving team. As a freshman, she qualified for the 1997 FHSAA State Championships. She then joined the high school JV Softball team, Weightlifting team, and Flag Football team. After completing her freshman year, she joined North Florida Diving under the direction of 2-time Olympian Wendy Lerew. Throughout her high school career, she qualified for three more state championships and was the 2000 FHSAA 2A State Champion.

Upon graduation in 2001, Courtney continued her education and her diving career with 2-time Olympian Patrick Jeffrey at Florida State University. During her freshman year she captured 1st place at the Atlantic Coast Conference meet and was the team’s Most Improved Athlete. During her next three years at FSU, she was an All-ACC team member from 2001-2005, 2-time ACC Champion in the 1 meter and 10 meter events, ACC Honor Roll member, Women’s Swimming and Diving team MVP, 2-time Coaches Award Winner, 2004-2005 Women’s Team Captain, and 2-time NCAA All-American in the 1 Meter and 10 Meter events.

Upon graduation with a double major in Child Development and Psychology, Courtney was offered a Graduate Assistant position with the Women’s Diving team and pursued her Master’s degree in Child Development. While in graduate school, Courtney was a member of US Diving competing for Tomahawk Dive Club in Tallahassee. She was a multiple time Senior National Finalist from 2004-2007 in all three events with her best finish being 5th place on 1 Meter at the 2007 Senior National Championships. In 2006, she was invited to the US Diving Selection Camp in Indianapolis, In. for a chance to be a member of the US Women’s 3 Meter Synchro Team.

Courtney began coaching for Atlantic Coast Diving in March of 2012. Her goals for the club team are to share her love of diving to divers of all ages and ability levels. She wants to help divers to achieve his/her goals in diving, whether it is to compete in high school, receive a college scholarship, or become an Olympian.