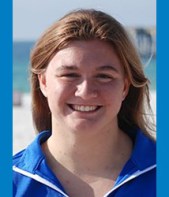 Jess joined ACD in the summer of 2015 and quickly learned her Junior Olympic diving list. She became one of the top divers in the JO Group and an amazing teammate and motivator for everyone at ACD. She is now a member of the University of West Florida Women's Diving Team.

High School: Started diving with club team Atlantic Coast Diving in July, 2015... Was a member of the Oakleaf HS swimming and diving team for two years... Placed fifth as a senior at the FHSAA Division III State Diving Championships in the one-meter event with 355.30 points... Holds high school records for the 6 dive list and 11 dive list... Earned a letter both years as a diver.

Personal: Daughter of Kimberly and Tim Farrell... Has one sibling, a twin brother, Jonathan, who is autistic... Member of the National Honor Society and Beta Club all three years of high school... Graduated 3rd in her class... Volunteered at Hope Therapy, which specialized in horse riding for persons with special needs... Enjoys horses, math, listening to music and loves her cats... Qualified and competed in the 3-meter event and made finals in the 1-meter senior event at the US Diving Zone Championships in 2017... Would really like to major in Civil Engineering, but current major is Mechanical Engineering.<< New image with text >>