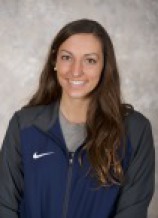 Meg joined ACD her Freshman year of high school. She quickly became one of the top divers on the team with her gymnastics background. She is now a member of the Georgetown University Women's Diving Team.

Prior to Georgetown: Was a four-year member of the Ponte Vedra High School swimming & diving team, serving as team captain for her junior and senior seasons ... Was a Florida High School Athletic Association Diving State Championship qualifier (2014-16) ... Placed third in 2015 and was named to the 2015 Florida Times Union All-First Coast Swimming & Diving First Team ... Led Ponte Vedra to four-consecutive District 3 Championships and three Region 1 runner-up finishes ... Also was a three-year captain of her club team, Atlantic Coast Diving Jax, where she had a first-place finish in the 2016 AAU Diving National Championship ... Named a National Interscholastic Swimming Coaches Association (NISCA) All-American in 2015 and Academic All-American in 2016 ... Out of the pool, was in the top two percent of her graduating class, named AP Language and AP Literature 2015 Student of the Year, recipient of Academic Excellence 4.0+ Award, an AP Scholar with Distinction and a member of the National Honor Society.